I've had a few inquires as to what has happened to me.  Why haven't I blogged lately?  First, I want to thank you for emailing me, and yes I'm fine.  I was surprised that you noticed I was missing in action! How kind of you---and now I will try to catch you up on things around Timber Hill.  In some ways literally as Bill has been having problems with his leg and back. I have been the chauffer for all the tests and office visits. After two cortisone epidurals, he is still no better. This coming week he starts physical therapy for four weeks in hopes he gets some relief from the ongoing sciatica and lower back pain.  Keep good thoughts and prayers for the coming weeks----

In between appointments and doing some chores around here that Bill normally takes care of, I have managed to get in some sewing and quilting time.

We even had a few rainy days which are much needed around our area as we have not had a good downpour of rain for weeks. I love to sew when it's rainy.   I think it was early January since we last had any substantial rain.

In January I traded in my less than one year old Pfaff Creative Performance sewing machine for a new Brother DreamWeaver VQ3000. I gave you a teaser posting about it in February.  Pfaffie and I never "bonded" that well, so when my wonderful dealer offered to do a trade with me. I was more than thrilled to give him back Pfaffie.  I'm sorry we never quite got along. 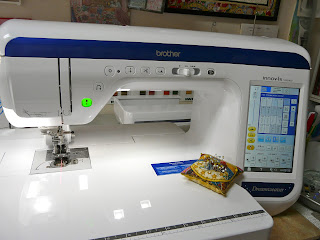 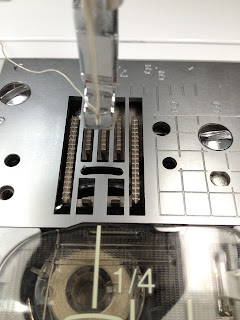 "DreamWeaver"---isn't that an interesting name for a sewing machine? It sort of says it all. It really is a "dream machine"! I knew the moment I sat down to sew with it we would be best buds for a long, long time.  There is truly not a thing I don't like about this sewing machine.  I basically wanted it for the 7 mm -seven point feed dog system.  It grabs the very tip of the smallest piece or edge of fabric, pulls it under the foot, and sews so smoothly and evenly. Quietly. (Pfaffie did make a lot of noise at times.)

This machine also reminds so much of another beloved sewing machine I foolishly sold with my quilting system years ago.  The Brother PQ1500. It had a marvelous feed dog system too.

The DreamWeaver not only has this great feed dogs system, it has a bunch of dream-stuff to go with it.  Lighting for one thing---I had to turn it down. I've never had to turn lighting down on a machine. Usually I've had to put another source of light next to the machine.  If you look at the above photo, you will see a glowing reflection of the lights. They are set on 3 in this picture. I can turn them up to 5 which is too bright for me, and I can use all the light I can get normally.

Notice the wide arm area. That's 11.5 inches of space on the right of the needle. Is that ever nice when piecing quilt backing or sewing on a quilt binding!  The extension table is large, and is included with the machine. 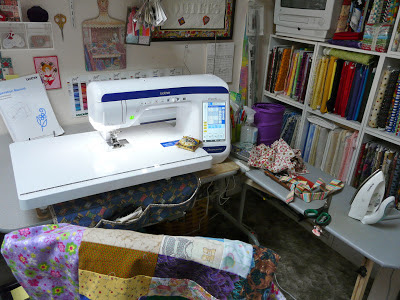 The automatic threader is another wonderful feature. Just push a button---swoosh, the needle is threaded. No need to align or pull down and then push/pull any type of needle threader. The machine does it all. Same auto feature with the thread cutter.

The DreamWeaver has some new features that rather unique for sewing machines at this moment.

New advances in sewing machine technology. I wasn't sure if they were gimmicky, or for real.

Let me assure you they are real, and really nice to use.  Here are a few picture of how I have been using the laser light feature. Diagonal seaming. No need to mark or press a crease or attempt to eyeball your diagonal stitching. Turn on the laser, move it center, or in mm increments left or right and you have a built in beam of guiding light. 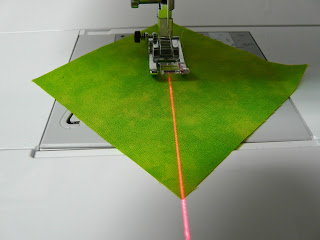 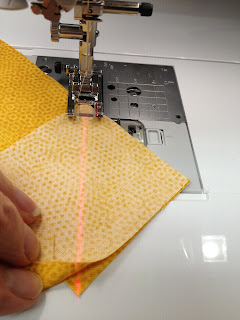 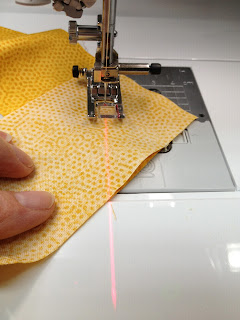 The MuVit foot rolls along. No more walking-stepping motion like a regular walking foot. MuVit stitches very straight with little hand guiding and and evenly feeds heavy or thin fabrics. It does not care what is in the way, it just rolls over it! 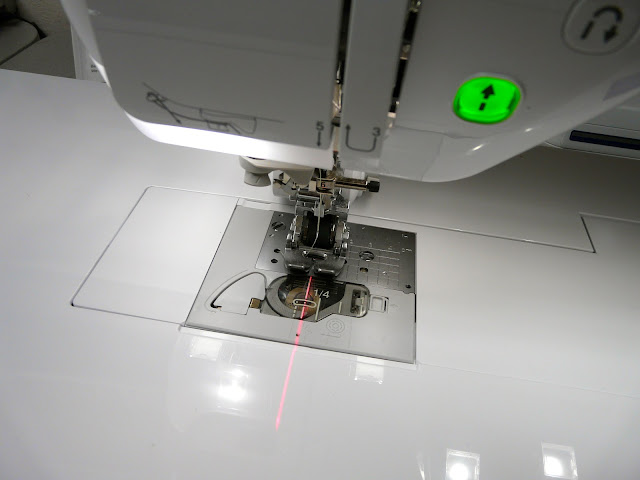 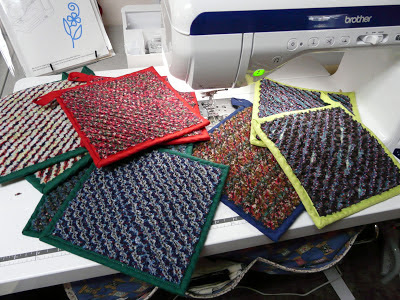 MuVit was great for sewing some of the  chenille pot holders a few weeks ago.

If you are considering a new sewing machine. Take a look at these Dream machines.
There are three in the series. This one, the VQ3000 is the sewing and quilting version.

The others models are the embroidery sewing machine, and they also have an embroidery only machine.  I have more catching up to do, but it's late---more tomorrow.

That laser light has to be my most favorite feature, oh and the bright regular light! So happy to see you back and posting. Hope the sciatica is getting better soon. I've only had it once and it was awful so I really can feel for your husband.

Nice review on your new machine, Angie. You are tempting me! I'm sorry Bill is having troubles with his back--I'll bet the physical therapy will really help. Take care!

I just love that laser light , what a great idea :-D

So sorry your husband is having such back issues I know how awful that can be. Your new machine looks amazing the laser light must save so much time.

Hello! I am wanting this machine soooo bad! LOL! I linked over to your blog from PR where I searched for posts on the DreamWeaver. I have to sell my current machine before I can get the DW, can't wait! Your review was very good, glad you are enjoying sewing on it.

So sorry to hear of your hub's ills, just this last week my sciatica flared and I was in a world of hurt! I've been doing my stretches, hot compresses, sitting properly at work etc etc praying it doesn't get worse, I hate to go onto the meds but one has to in order to stand the pain.

Angie,
Just wondering, I think you also have a Babylock embroidery machine, what made you go with the Brother Dreamweaver vs the Babylock Crescendo? I am currently researching both. Thanks.
Teresa

Hi there, I am curious to your answer to Teresa Boi's question. What made you chose Brother over the Crescendo? I know Brother has Disney and Crescendo doesn't. Crescendo offers 8(?) different stitches. I heard quality is different, but I don't know which is better... Help!!
Thank you so much!