I've tried several types of scissors for cutting quilt batting. Once upon a time I had the rechargeable battery operated type. I liked them a lot, while they lasted. The built in battery wouldn't hold a charge after about a year, and that was that. No inexpensive way to revive them. The rechargeable sealed battery pack cost about as much as the scissors, which were not inexpensive.

So, it was back to the Fiskers spring loaded type scissors for cutting batting. They work very well, but your hands do get tired when you are cutting long lengths of batting.

And then I saw these "Handi Batting" scissors while browsing around on the net---and Whoa! Now those are big scissors! and they are specifically for cutting batting and no batteries!

I'm a sucker for scissors I gotta tell you. So, these were calling my name! 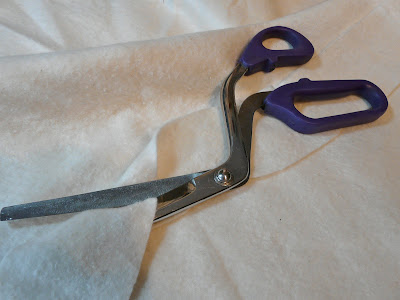 They run about $29.00 and with those super long sharp cutting blades and roomy angled finger grips---you can cut layers of batting with ease!

Here they are with all my other scissors. Each scissor has a purpose, and place to hang out. I can't explain why I have collected all these scissors! but I think it has something to do with my compulsive behavior of collecting fabric and thread! These are just a glimpse of the "sewing scissors". There are others around the house in desk drawers. Kitchen drawers and bathrooms too.
There are also the pretty scissors. See the last picture for the "pretty scissors"! Here is what I found just looking around the sewing room. 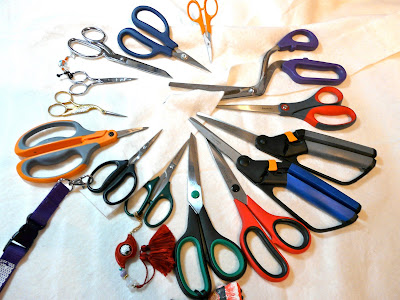 First in the circle are the Batting scissors, and down below is the very inexpensive red handled "Scotch" brand scissors. Since I love Scotch brand tape, I had to try their scissors. They are surprisingly good cutting scissors considering they cost a few dollars at the local hardware store. I found them hanging at one of those tempting cash register displays. I couldn't resist!

Below the Scotch are the two spring loaded Fiskers. (grey and blue). Still sharp after cutting yards of batting.

Next are my two favorite "cut everything" type scissors. I'm not sure "Mundial" make these nice comfortable padded grip scissors anymore. These are about 12 yrs. old and I've had them professionally sharpened once in all that time. They have stayed sharp after cutting for years. Never fail.

Next is a smaller green handled "Clover EX-135" scissor that I keep at the cutting table for clipping loose threads & such. The point on these pair of scissors is like a needle and great for getting around machine embroidery applique, or clipping seams.

The dark blue handled scissors with the lanyard are kept at the long arm. They have slight curved blade, and are good for clipping threads at the needle and not accidentally cutting the quilt top fabric. No brand.

Next, the orange large grip handle scissors with the short blade are Fiskers "chenille fringing scissors", except I don't think I've ever used them for that purpose, the blade depth seams short. So, they just hang out in a drawer in the sewing room. Not used much.

Then there is the beloved little "Stork Scissors". What good hand embroiderer would be without a pair of these in their scissor arsenol? Next to the Stork scissor is a small pair of "Mundial" embroidery type scissors that are more practical than the Stork scissors and get a lot more use when I'm doing hand work.

The next pair is a regular medium weight shiny silver metal dressmaker type "Mundial" scissor. They open and close so smooth. I've found that is an important feature when testing out scissors; that they not only cut well, but open and close with ease.

The next pair of scissors are a close favorite. Dark blue soft coated handle grips, with a shorter 2-1/4" sharp pointy blade. "Famore S-732". They are just a good pair of all around general purpose scissors.

Next are the pretty scissors. I found them at an estate sale. They must be the predecessor to the cute Stork scissors. They appear to be for handwork and embroidery thread clipping. Small short cutting blades with bakelite handles inlaid with yellow gem stones. 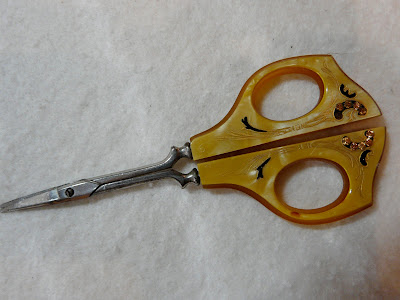 I'm sure at one time they were the envy of the ladies sewing bee. I like to think about who may have owned them, and how treasured they must have been.

I thought I was the only scissors junky around. I love all those scissors. Make sure you run the metal detector over me when I am leaving if I come to visit again.

I love scissors too. I was recently nominated on a blog for being a generous crafter and I won two pair of scissors .. I'm tempted to go out and buy another one just like the larger pair to have downstairs in the longarm room.