One of the outdoor cameras by our garage captured this picture.  Our garage is about 30 yds from our house. We live up a steep driveway that curves into a parking area near the front of the house.  We have a bell that rings up at the house if someone passes through a beam of light type alarm further down the driveway so we know someone is here, and we also have a monitor that is attached to a camera at the front of the garage so we can see who has entered the parking area.  Last year a mountain lion came up the driveway about dusk, and we could see it on the indoor monitor. It walked out of the sight of vision of the monitor camera, however since then my husband has installed two of the  motion detector cameras that take pictures. Day or night. We have never captured the mountain lion again on the camera, (much to his disappointment)--- but the cameras did go off and take a picture of this Bobcat.  We also have some fairly large Fox, Raccoons, Deer, Wild Turkeys, Possum, Coyote, Skunk and stray domestic cats captured on the  camera disc.
It's interesting to get the digital cards out of the cameras and see what went through the yard that we never notice, or see.

We take Boots on a leash out for her evening walk, and it's up here close to the house where we walk.  She is too small to be out by herself, especially at night.  We also have eagle, hawks and owls. They like little dog snacks too! 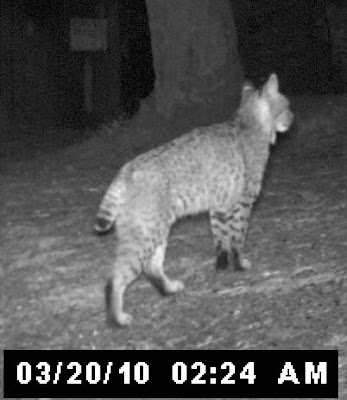 
The Bobcat is a wild cat native to North America. They are found mostly in the United States, southern Canada, and northern Mexico. The bobcat is an adaptable animal that inhabits wooded areas as well as semi-desert, urban, and swampland environments. They live in a set home range which shifts in size with the season.
In appearance the bobcat is quite similar to the Canada Lynx but is usually significantly smaller. In color they are mostly tan to grayish brown, but can vary. They also have numerous black streaks in their coat, with dark bars on their forelegs and tails. Their spotted coat allows them to blend into their environment. The ears are black-tipped and pointed with short black tufts. There is generally an off-white color on their lips, chin, and underparts. Kittens are born well-furred and already have their spots.

Adult male bobcats are 28 to 47 inches long, and height to their shoulders is about 14 or 15 inches. Included in their length is a stubby 6-inch tail, which has a "bobbed" apearance, which gives this species its name. They weigh about twice that of a house cat, with adult males usually ranging from 16 to 30 pounds while the females, which are smaller, average about 20 pounds. They are muscular, and have hind legs that are longer than their front legs, giving the animal a bobbing run. They weigh 0.6 to 0.75 pounds and are about 10 inches in length at birth. By their first year they will reach about 10 pounds.

They keep on the move from three hours before sunset until midnight, then again from before dawn until three hours after sunrise. Each night they will move from two to seven miles along their habitual routes.

As a predator, the bobcat is able to go for long periods without food, but will eat heavily when prey is abundant. During the lean periods, they will often predate larger animals which they can cache and come back to later. The bobcat hunts by stalking or ambushing their prey and then pouncing or giving chase for short distances. Their preference is for mammals about 1.5 to 12.5 pounds in weight. ( Our maltese/poodle mix," Boots", weighs approx. 10 lbs.)
Their main prey varies by region. In the eastern United States it is the cottontail rabbit, but in the north it is the snowshoe hare. When these prey exist together, as in New England, they make up the primary sustenance of the bobcat. In the far south, the rabbit or hare is sometimes replaced by the cotton rat as the primary food source. The bobcat is an opportunistic predator that, unlike its Canadian cousin the Lynx, can readily replace its primary prey with a variety of options.
The bobcat hunts animals of three different sizes, and will adjust its hunting techniques accordingly. On small animals they will hunt in areas known to be abundant in prey, and will lie, crouch, or stand still in wait for an animal to wander close. It will then pounce, grabbing its prey with its sharp, retractable claws. These are usually small rodents like mice and squirrels or birds, but also fish and insects. For slightly larger animals such as rabbits and hares, they will stalk from a covering and wait until they come within 20 to 35 feet before rushing in to attack. Less commonly they will feed on larger animals such as foxes, minks, skunks, and house cats. They have been known to kill deer as well, especially in winter when smaller prey is scarce, or when deer populations become more abundant. They will do so by stalking the deer, often when it is lying down, then rushing in and grabbing it by the neck and biting through the base of the skull or chest. While they rarely kill deer, when they do, they eat their fill and then bury it with snow or leaves, often returning to it several times to feed.
The bobcat has no major predators other than man. The coyote has been known to be a direct predator of the bobcat, but has an unknown effect on their populations. Cougars and wolves may also occasionally kill bobcats when they get the chance. Death is due to a variety of causes, such as diseases, accidents, hunters, automobiles, and starvation.  Many bobcats will live to six or eight years of age, with a few reaching beyond ten. The longest they have been known to live in the wild is 16 years, but in captivity have been known to live up to 32.2 years.

Oh I wish my husband were here to see this picture! I'll show him another time! That is so cool--but scary too, hope your little dog stays inside at night.

Those cameras sound like a fun idea. We enjoy the wildlife around us, too. A few years back, our house overlooked a dry canyon here in N.CA. There frequently were bobcats in the yard and occasionally the cougar. There was an abundance of deer and the cats follow the deer.
A funny wildlife story... we live on the edge of town now. One evening I fried fish, using the exhaust fan during the process. The exhaust exits near the back door. Next morning, I discovered raccoon paw prints on the back door just below the handle. That little feller was doing his best to get the door open so he could join the feast!

WOW!! Very cool picture but its scary too... We have raccoons that walk across our back fence in the evenings and early mornings, they scare me too cause our little dogs think they are St. Bernards...

How very cool Angie! I love the idea of the cameras so you can see who's been visiting. We have lots of raccoons (who have taught me to re-think where I put garbage cans) and coyotes and the biggest barn owls I've ever seen. I won't let our cats out at night for fear the owls will think they taste like chicken!

Angie, that is so cool! I'll bet you have to be especially careful with Boots. We have mini Schnauzers, and that's one reason we opted not to live rurally.