The Iron Saga--- a Happy Ending!

It has been an interesting week researching and testing irons. I narrowed my choices down to two brands.

I want to thank all of you for your helpful comments and emails. There were many good suggestions.  The Olisio iron was my first choice.  The pretty yellow model! It arrived on Tuesday. This is Oliso. 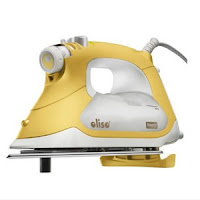 Now, there is no pretty Oliso iron in my sewing room. The Olisio has been returned due to the leaking back lifter.

When looking at the first photo. See that wide yellow bar right behind the sole plate? It is one of the "lifting" mechanism that makes the Oliso iron different in a novel-helpful sort of way. I did like that I didn't have to set the iron upright. Clever concept.  I also really liked the 30 min. auto turn off feature. Overall the iron is nice.

Entering the sewing room---The Hamilton Beach Digital Iron. Model #14875 1500 watt wonder! I read all the reviews I could find on this iron. Far better reviews than I have read in the past for any iron. I was however still skeptical. And having just returned two new irons of another brand that failed,  I approached the Hamilton Beach with an attitude. Like, show me your stuff! --or else you are so out of here! 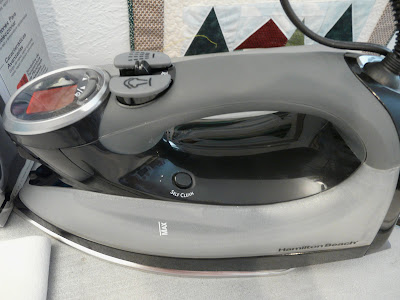 I would not say this is a "pretty" iron. Rather bland in fact. Don't be deceived by it's appearance!  I read all the directions, plugged in the nice long cord, and adjusted the temp setting to Cotton. 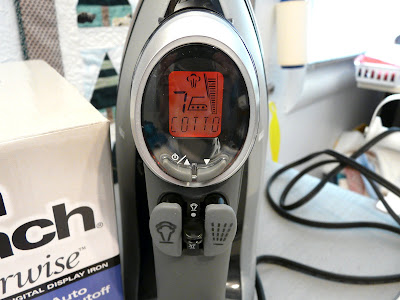 I ironed some of the cotton-linen dishtowels in preparation for machine embroidery. If an iron is going to be good at smoothing out wrinkles and creases on yards of quilters cotton, then how well it irons linen is a worthwhile test in my opinion.

The handle and weight of the Hamilton Beach Digital has a nice comfy feeling. Not overly heavy. 3.5 lbs. Not too light either. I adjusted the steam setting at medium and it made a steady steam from the highly polished stainless steel soleplate. 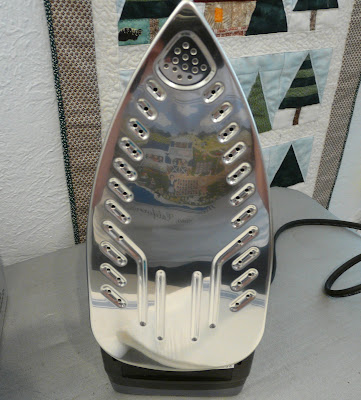 The steam indicator slides from no steam to perking out a lot-lotta steam. The iron uses spring water or tap water. Not distilled. Good, because I didn't have distilled water anyway, and our tap water is hard, I would never use it in an iron. (The Oliso irons also required spring water fyi.)

The Hamilton Beach Digital has an auto off feature of 15 mins. in upright position, and if you leave it unattended or it does not sense any movement on the fabric when flat, it will turn off in 30 seconds. Both  settings are good for me. I did not want an iron with no auto off setting as I have in the past (not often, thank goodness)---forgot to turn the iron off.

While I would like the constant on function. I'm forgetful, and I'm actually willing to deal with jiggling an iron or turning a dial (or with this iron pushing button)--- to have it come back on rather than risk setting something on fire!

And the Hamilton Beach Digital come back to full heat in 45 seconds!  when left flat unattended (oh-yes, I mentioned that) which is amazing to me compared to other irons I have owned that can take 3 mins. or longer to reach full ironing heat.

I'm not going to forget the best part. How does it iron fabric? Really wonderful! The linen dishtowels were very flat and creaseless in minutes. Smooth and dry feeling! No residual dampness left in the fabric which was one of my requirements for a new iron.


Be still my heart!--Could it be I have found thee Perfect Iron! Time will tell. 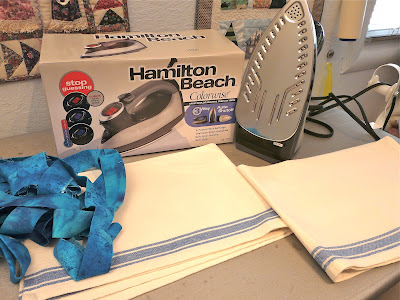 When I say that I mean will it be perfect weeks, months or even a year from now?
I will keep you posted in the future. In the meantime for me, right now,  this is an Awesome iron!

Edit: As Colleen reminded me; Only a Quilter could get this excited about a new Iron!!!

Sorry the Oliso's didn't work. Mine has been good so far - knock on wood. I don't blame you at all for returning. Congrars on the Hamilton. Having a good iron is really important.

Amy, I know owners of Oliso irons that are very happy with their irons. This must have been a bad batch or something. I just couldn't risk buying yet a third Oliso. I also kept wondering if it didn't leak now, would it leak later on. Nice iron otherwise.

Angie -- Great post! I was laughing ... only a quilter could get so excited about an iron. Loved your review, and I'm ready to run out and buy the Hamilton ... oh wait, I don't NEED an iron just yet! But reading about your new one made me want it!

Bought the HB Digital and loved it but sadly had to return. It beeped. I have a rescue Min-Pin that is afraid of her own shadow. She was used as a breed dog and abused and very sick little girl when we got her. Anyway brought the HB home - new iron YEA.LOL. Plugged it in - it would beep when turned on and reached temp. Don't know what it was about that beeping but would send Nelli under my bed on the other side of the house. Just broke my heart that the beeping would set her off like that. Took 2 hours to get her out from under the bed & even then she was still afraid. So I just packed it up and took it back. A friend said she would get used to it. She's had to adjust to too many things in her life - easier to find a new iron. Same friend felt so bad about it that she found me an iron at the flea market - old black/decker - gets really hot and no beeping. But good luck with your new iron others in the area that have purchased the HB just love it.

Gina, I just went and listened to my new Hamilton Beach Digital. If and when it beeps, it is a very quiet short beep. Hardly noticeable. It only does it when it's turning off automatically. Maybe they have changed that feature to a quieter beep. Almost all the new irons beep nowadays. Sorry it makes your dog anxious. But, best to keep the dog happy!

Glad you found an iron that meets your requirements and makes you happy. I know how important an iron is. Sorry the Oliso did not work out.

Angie - I have to replace my Rowenta iron. The dogs knocked it off the ironing board and now the reservoir leaks :( I enjoyed reading your entry about the HB digital iron. I also like the price point. Hope it works out for you (and me?)