I'm considering painting or coloring some parts of the Prayer Garden machine embroidery quilt blocks.....like the daffodils and leaves in this quilt block. Anita Goodesign suggests using Copic markers. I already have a few sets of markers to use on paper. Some say permanent, or waterproof, archival or acid free. I decided to test all of them out on a piece of cotton fabric then set the colors with a hot iron and wash the fabric.  Here are my results: 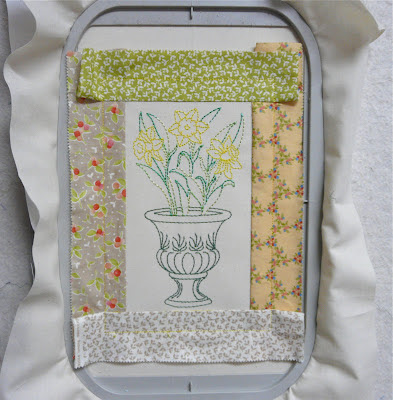 (One of the quilt blocks I plan to color.)

The following pictures show the final results of my testing.

#1-The Pentel Gel Roller is first and I consider the best of all the markers I tested.

The Pentel Gel Roller marker did not skip or resist rolling across the fabric like some permanent pens or markers do. It also did not migrate or "bleed" onto any of the adjoining fibers of the cotton test fabric. I would give it a high score and I may invest in more colors of this marker brand.

The Signo Uni-Ball marker came in a close second except it did not flow as smoothly across the fibers of the fabric. But, it also did not migrate or "bleed" which makes it a good second choice.

The Zig also did not have the nice roller action of the Pentel, and it also showed just a tiny bit of migration or bleeding onto a few threads on the fabric near the pen line. I could see less definition in the fonts as well.

#4- The Vellum Writer has a writing tip at each end of the pen. A fine tip, and a medium tip.

This marker could be 2nd or 3rd choice because it really did not migrate or bleed any more then the Signo or Zig, and it's a plus to have the two tips which did write fairly smoothly across the fibers of the fabric.

With the BIC Mark-it I started to see  unacceptable results.  Definite migrating and bleeding for sure, but also a yellow or orange residue surrounds each letter in the writing.  This occurred after heat setting and washing.  The BIC marker did have a nice writing tip. But, the orange residue around the red marker lines is very detracting and I would not use it on fabric. 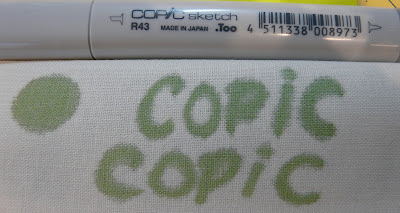 The Copic marker on fabric testing results were surprising.  This was the suggested fabric marker for the Prayer Garden project.  Looking at how badly it migrated and bled around each drawing line makes me glad I tested this marker before using it to color any of the embroidery.  I could see it would migrate under the thread, or even onto the thread.  The Copic marker also has a fine tip, and a wider brush like tip. As you can see both bled so badly on the fabric you can barely detect which is the finer tip lines. (it is the first "Copic")--- and which was the brush type tip. Glad I only purchased three colors to test this marker.

I guess I don't have to say--- the Spectrum Noir marker is the worst. As soon as the fine or wider of the two tips touched the fabric,  the ink started to spread out like a puddle which made the individual letters difficult to see and read in this sample. 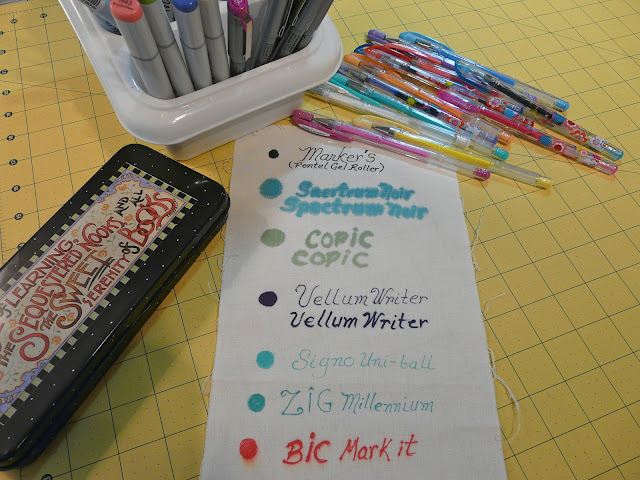 Time spent testing the markers was interesting, and certainly worthwhile.

Great post! Thank you for sharing your testing results with these color pens. I have not used any pens lately due to the fact that I was afraid they would bleed. I have had that problem before with other color markers I have used. Thank you again for sharing your results.

Angie-I'm getting ready to start on my Prayer Garden as well. What size blocks are you making? As usual your's is terrific.

I tested some markers last summer and ended up with the Pentel also. I needed something for people to sign for a wedding quilt - which is still not done. I thought they were only available in black, blue and red.