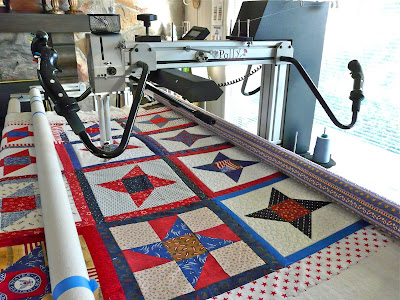 I've had, "Polly" my Prodigy Quilter for about a year now---and when we had it installed we decided to have the front handles of the machine facing towards the large window in the living room, rear handles to the back near the window and wall. This way I could look outside when I'm quilting from the front of the machine. Also I probably chose that angle because my old long arm was set up that way as well. Old habits ya know.---- I now remember when Richard from Prodigy was here last year to install the frame , he asked me which way I wanted the machine and frame facing, and also reminded me "you know you can use the surface of the frame as a table for other projects, are you sure you want it facing the window?" I told him I probably wouldn't use it for anything else, just angle it up close to the window and let it go at that.

The Prodigy Quilter frame has these nice large caster wheels 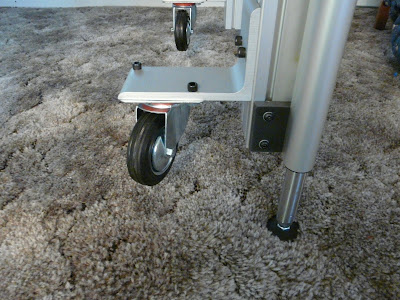 and when I want to quilt from the back of the machine, I just let the hydraulics release the frame downwards, and push it out a bit from the window towards the middle of the room. When I'm finished I push it back near the window. It's heavy, but with some "hip action", it moves pretty easy. :o)
Yesterday as I was doing some cleaning and vacuuming under the frame, I decided to turn the entire system completely around. Just an idea I had. That maybe facing the room would be better. If I didn't like it, I could turn it back around. Well---- 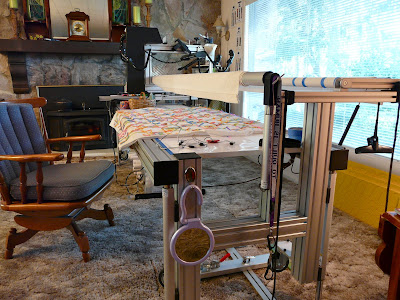 Loving it! Why I have I been facing the window this whole time? Beats me! All this time I've been missing out on having this wonderful long flat surface to work on because it wasn't that easy to get to as the back frame edge was so close to the window most of the time. Setting up anything back there to work on was just not that convenient , except for a pantograph or using the circle lord.
But now, I have full access to this large usable table surface, and at any height because of the hydraulics. I also have the wonderful natural light from the large window as well. The other plus---- I will no longer need to move the frame in any direction. It's just perfect the way it sits now.

After the "turnaround" I decided to spread the vintage quilt I've been tying with yarn across the table surface. What a nice place to work on some larger projects! :o) Just pull up a chair, raise or lower the table, get comfortable and I can see a whole new use for my frame/table happening. A new work space has appeared! 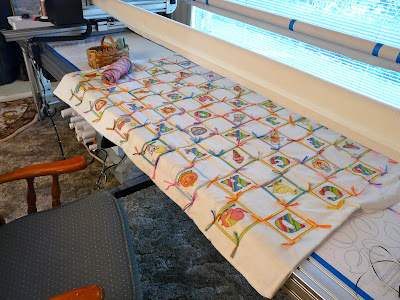 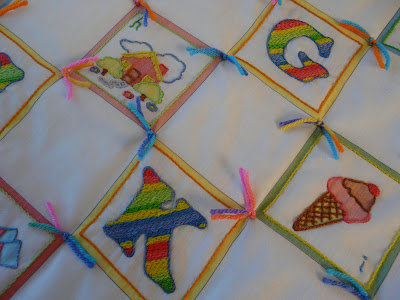 The quilt is turning out ---cute. I want to do some topstitching on the edges and it's done. I'm glad I followed the suggestions some of you emailed to "tye" it, rather than machine quilt it. Thank you!
Now, I only wish I had listened to Richard's suggestion about which way to face the frame. (sigh) Live and Learn applies once again.

I didn't realize it would give you another work surface either. What a great multifunctional machine and idea! Love the tied quilt. My daughter wants a picnic quilt tied and we've been searching high and low for fabrics for her. She's pretty picky for just being 17, lol!

Angie, I loved this post! I don't know why, but I absolutely LOVE to see other people's work space, especially when they've changed something around and found new joy in it! Fascinates me to no end!

I love the baby quilt, the yarn is just perfect!

A fireplace in your studio?? WOW! I also like looking at other people's work space. I like the basket that sit on top of your machine, that sure is handy. Love the quilts too!

You are open to change, that's a good thing. I don't know that I live by it, but one of my favorite sayings is "when you're green you're growing, when you're ripe you're rotten". No rot for you, lol.
I love the hints and the quilt on your previous post. I had wondered about the new thread and the rulers.

Isn't it great when you discover a new purpose for something? I would love an adjustable table surface. Cute quilt.