I'm learning how to do spineless feathering from Elaine Huffman's book, "Crisscross Dancing Feathers". I think I've found a wonderful feather-niche with these! After some practicing I could manuver the corners. Yeah! In the past curving around corners has been a challenge. Also, no marking and no spine with these feathers! 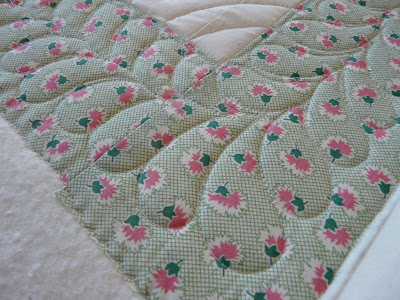 This is a friends quilt I'm doing. She initially wanted small swirls in each four inch block. That was pretty tight quilting, and getting each four inch swirl evenly spaced as I curved around was not much fun either. So, I convinced her to let me use the larger swirls instead. I like how it looks so far. 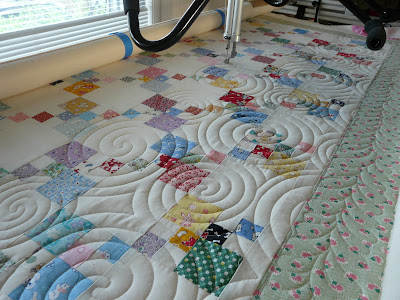 Sassy had her second series of puppy shots on Wednesday. She now weighs 4.1 ounces. I think the point 1 must be her long fur! The vet seemed to think she would weigh between 10 and 12 lbs. when she's fully grown. She is learning to "sit". Potty training is still hit and miss! She has adjusted to wearing her collar, but now hates her leash! 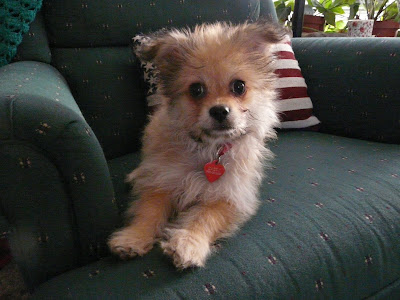 Nice quilting, and such a darling puppy pix.

Love the quilting, it's wonderful.

Chesty will be 10 in June! I don't know where the time has gone but we've just made flight reservations for a visit to GA and he's at the 14lb mark. Just small enough to fly under the seat!

Thanks for the link to the crisscross feathers! They look fun to do! I especially like your swirls...are they a pantograph?

Love those big swirls, they look great! Have you had a chance to check out all the great quilting inspiration over at www.WeAllSew.com? I think you'd like browsing around!

Sassy is adorable. Do you ever watch It's Me or the Dog? It's on Animal Planet with dog trainer Victoria Stillwell. Excellent show! With her suggestions I think you could probably teach Sassy everything except how to quilt. But on second thought with your talent you could do that.