My previous blog posting was about Adobe Ideas and how I just emailed myself the finished drawing.  This a.m. Heartstring blogger, Mary J. emailed me and asked why I didn't do an image capture or screen save.

Well probably because I had never did one with my iPad, and didn't know how.  Mary says:

Holding the round iPad home button and the iPad on/off button down at the same time snaps a photo of what's currently on the screen and Mary said she uses it a lot.


I tried it a few times, and it didn't work for me at first, but then I learned the problem was I didn't do it quickly. You have to hold the buttons for just a second sort of like the camera shutter button. The iPad screen turns white, and you can hear a click. Ta-da! 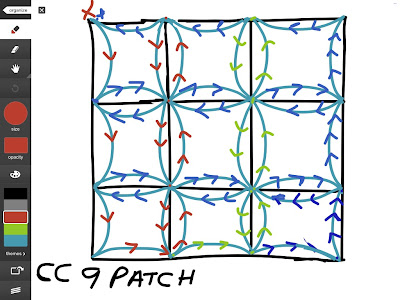 This is a screen shot of a drawing I had saved in Adobe Ideas. The continuous curve quilting path for a 9 patch block. Image captured and it showed up in Photos on the iPad. From there I sent the photo to my email. It arrived as a .png file, but I converted it to .jpg in my desktop photo album software before publishing it here.

Thank you, Thank you Mary!

Mary also has an 'apps' tab on her blog with other sewing and quilting related apps listed.